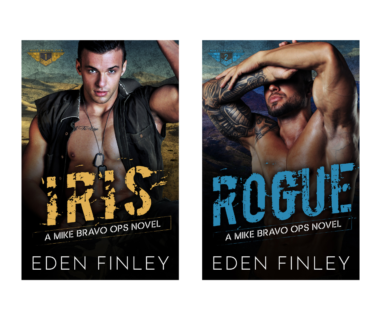 I live for adrenaline. The thrill of the chase. And because I work for Mike Bravo, a private black-ops firm, it’s my job to go into dangerous situations.

But when we’re called in to extract a military team from a hostile situation, the thrill is so much better. Because one of those men happen to be the golden boy from my basic training days.

Brock “Saint” Harlow was a walking Captain America in the flesh. The perfect soldier.

Now my boss wants to recruit him, and I can’t wait to rub it in his face that he was rescued by me. The class clown.

I’m not called Iris “I require intense supervision” for nothing.

Military life is all I’ve known since I was born. I was raised to be a soldier.

But when a top-secret mission fails, I find myself suddenly discharged with nowhere to go.

Mike Bravo saved my life, and they want me to join them, but there’s one small problem.

He’s as irresistibly snarky as he always was, only there’s a big difference this time. I’m no longer closeted or scared to live my truth. And the truth is, I’ve always wanted him.

It’s against Mike Bravo’s rules to fraternize with other team members, and I always follow orders.

But something tells me Iris might be worth the insubordination.

I remember the first time I met Dylan Rodriguez. It was one sweaty encounter I’ll never forget.

The second time we met, he arrested me. I can still see the hot scowl on his beautiful face as he slapped handcuffs on me and realized I was … me.

Dylan’s main goal in life is to forget he ever met me. My goal is to make him mine.

Turns out, I'm better at this game than he is.

When my law enforcement career falls to pieces in front of my own eyes, I don’t know who I can trust.

I have nowhere to go. No one to turn to.

Asking Trav for help is a last resort, but I’m desperate.

If he can’t get me out of this mess, I may as well turn myself over to the guys hunting me down.

I’m not sure which will be more difficult: protecting my life or my heart.

Because when it comes to love, my heart wants what my brain doesn’t. It wants Travis West.