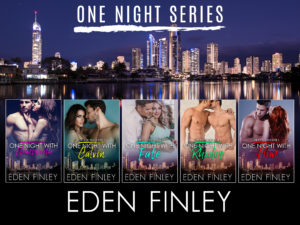 When I started writing, I thought I would always stick to writing Young Adult. It’s who I am (someone who hasn’t matured enough to be considered an adult yet. I may be in my thirties but I’m still holding out for the grownup gene. If anyone has any spares, can you send them my way? Thanks.)

I’ve always loved reading Romance, and all of my Young Adult titles have romantic elements, but obviously written on a more innocent scale than my One Night Series.

It’s actually one of my YA works than inspired this series.

One Night with Hemsworth is about Cole, a twenty-seven-year-old divorcee, and Paige, an almost twenty-one law student. Their love is … awkward, considering Cole was once married to Paige’s soon-to-be stepmother.
The odd dynamic was drawn from one of my YA books where my main character falls for a girl who happens to be his adopted sister’s biological sister. While writing this book, my two love birds kept trying to get inappropriate for a YA novel, and I had to rein them in.

Figuring I needed an outlet, I started writing those inappropriate scenes. And Hemsworth was born.

While writing Hemsworth, Cole’s best friend, Hunter, kept trying to steal the show. He’s one of those characters who demands his own book. And that’s how One Night with Calvin came about.

There. I was done. Two books under a pen name, I could release and not devote much time to.

Reece: I don’t like the way you depicted me in book 1. I’m not evil. I swear. I didn’t want to be the villain, but I’m messed-up. Please, please, please can you tell my side of the story?

So, I get started writing on One Night with Fate, where Reece has a one-night stand with one of her best friends since childhood and gets pregnant. Only, she happens to be engaged to someone else at the time. (Hence the villiany).

However, halfway through writing this one, a side character who’s been mentioned a few times but hadn’t been given any depth quite yet started whispering in my ear. “So, I thought you should know, you’ve kinda written me as a straight dude thus far. Can I just say you’re totally wrong.”

One Night with Rhodes ended up being written and finished long before Reece’s story, even though it’s book 4 of the series.

Seriously, I can’t keep up with these characters who continue to derail my Young Adult career by bringing my focus away from it.

But would I have it any other way? Hell no!

I love my One Night crew.

4 books down, 1 to go. And then who knows? My brain is full of a million ideas, and not all of them a teen appropriate. I’ll leave those ones to “Eden”.

For anyone interested in my Young Adult works (and finding out my real identity), click HERE. But before you do, you have to raise your right hand and solemnly swear you will not give away my smutty identity. Especially, don’t tell my mother. She won’t care about the content I write, but I’m scared she’ll want to read it!